Ables knows how to dress !!

Our Customers are fun and super nice

Ables Top Hat Chimney Sweeps started in Brady, Texas in 1980. Doug Ables has been the lone sweep in the intervening years and is now joined by his son Shandy and several grandchildren who help out as needed. Over the years we have cleaned chimneys along a wide swath of central Texas from San Angelo to Waco. In earlier years we cleaned and serviced chimneys and drier vents and at one time was the central Texas dealer for Fisher wood stoves. Fisher Stoves went out of business and we switched to the Napoleon line of stoves and have added Flame to the line. The Fisher was a very sturdy stove that has stood the test of time….however like many older stoves they fail the new air pollution standards that manufacturers must meet now in order to sell stoves and inserts. 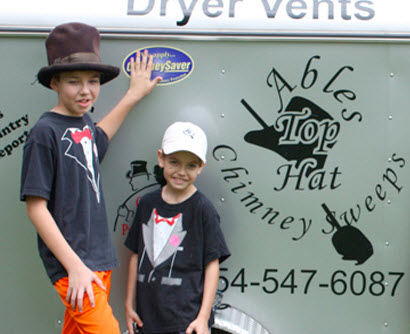